The singer of some melodious songs like “Moh Moh Ke Dhaage” from Dum Laga Ke Haisha and “Sawaar Loon” from Lootera recently revealed that she has been enjoying married life for past three years now.

She has managed to keep this secret for quite a while, though. But it seems she wanted to share this news with everyone now. In an interview with a news portal, Monali Thakur revealed that she tied knots 3 years ago with a Switzerland- based restaurateur Maik Richter.

Monali Thakur got married in 2017.

She even talked about how her ring has been mistakenly visible in her Instagram clicks. That might have hinted the world about her marriage. 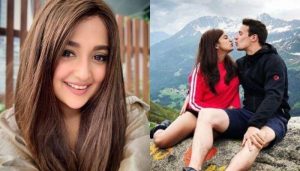 Monali Thakur got married in 2017

The 34-year-old melodious singer even said that the news of her marriage would come as a shock to her industry pals. She invited no one and didn’t also inform about her marriage.

In an interview, Monali Thakur said, “Mujhe pata hai bahot gali padne wali hai logon se, but I think when we have our wedding ceremony and invite people for the celebrations, they won’t be upset anymore.”

Singer Monali Thakur even mentioned that she has successfully been able to hide her marriage for the past 3 years.

Monali Thakur, in this interview with a news portal, even said, “Maik proposed to me at the exact spot where we had met for the first time, under a tree, on a freezing Christmas Eve 2016. My reply was an instant, yes.”

On 18 March 2020, she posted this video on her Instagram, mentioning how she spends had the year in India and the other half in Switzerland. She said in the video that she has a family there.

I am extremely worried about my entire country and it’s economy and healthcare system.. And I humbly request everyone to please spread awareness and don’t let this virus spread to the entire population at the same time.. this is not so crazy a disease.. but all falling sick together in millions will crash our health care system and economy completely.. I hope we all do our bit in stopping this disaster.. Love.. Monali #be #aware #corona #threat #on #economy #is #more #than #our #body #stay #fit #and #smart